The Pressure is On!: U.S. Rejoins Paris Climate Agreement

In January of 2021 President Joe Biden signed the executive order that the United States will rejoin the Paris Climate Agreement.

This names the country as the first ever to leave and then rejoin the accords. By doing this, President Biden reinstated the United States as just one Party in 200 other countries who have signed. According to a press statement  by Antony Blinken, U.S. Secretary of State, the purpose is simple: “To help us all avoid catastrophic planetary warming and to build resilience around the world to the impacts from climate change we already see.” As one of the largest countries in the world, the U.S. rejoining this Agreement is a way to re-establish its declining global standing.

The Paris Climate Agreement was put into effect in 2016 as an international binding treaty focused on climate change.

The goal of the treaty is to limit the amount of global warming to below 2 degrees Celsius. According to the United Nations Climate Change website the reason for this goal is to encourage countries to put a cap on greenhouse gases before the situation progresses too far to be remedied. This relies on the efforts of the country to stem the tide of peaking greenhouse gases.

It is the first binding agreement ever reached between nations on the topic of climate change and its consequences. Outlined in a 5 year cycle, the implementation will happen on both economic and social fronts with increasingly ambitious levels. By 2020 each country is expected to submit their personal climate action plan, called Nationally Determined Contributions (NDCs).

This planning structure is unique to the world stage as it relies on peer pressure. This means that each country’s attempts are not mandatory. Each country uses their unique NDCs and are expected to become more aggressive towards climate action with each passing year. The hope is that it creates a competition complete with transparency in emissions and efforts to curb the worst impacts from climate change.

In June of 2017, the U.S. became the first country to announce the intention to withdraw from the Agreement. In 2019, former President Donald Trump officially withdrew the nation.

At the time, the country represented 15% of worldwide greenhouse gas emissions and is one of the largest economies. All the while, there were many in the U.S. who agreed with President Trump’s decision to pull the country out of the agreement in 2017.

According to the Heritage Foundation, a powerful conservative think tank, some arguments played directly into the pockets of most Americans. Many called the Agreement costly, agreeing that it would waste taxpayer money and increase competition in the American energy markets. Nevertheless, there is little mention of what these markets will look like as climate change increases in severity. Moreover, the arguments don’t address that the U.S. energy grid is dominated  by finite sources like coal and oil.

Additionally, as stated by an article on the Clean Jobs, Better Jobs study, the loss of jobs in these markets will be replaced by renewable energy economies. Therefore, although the Agreement could be interpreted as costly, it could also be a way to save lives as the number of climate refugees increases substantially. Furthermore, U.S. National Parks face suffering ecosystems, such as Glacier National Park where the glaciers are receding. Such a loss of ice serves as a bellwether of climatic changes to come.

This action comes as a win to climate supporters worldwide, as the United States was one of the founding parties of the Agreement. Many hope this move will become a unifying act that will bring the almost 200 countries together. The pressure is on. 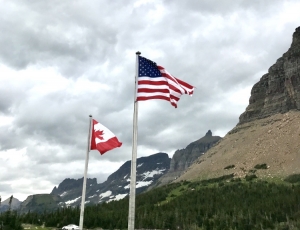 © 2020, Karleigh Cimorelli. Photo of the American and Canadian flags taken at Glacier National Park, Montana, symbolizing the park as Waterton-Glacier International Peace Park. Both countries work together, recognizing peace and goodwill between parks and their common mission of preservation.

About the Author: Devon Camillieri